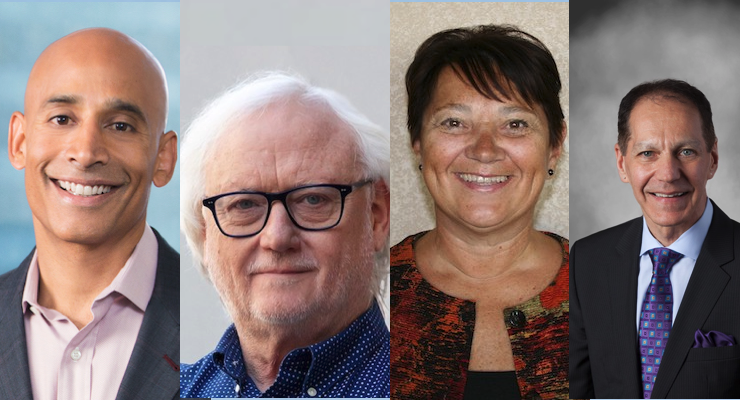 The Consultants Association for the Natural Products Industry (CANI) announced the recipients of its Lifetime Achievement Awards for four of its longtime members.

Amin specializes in assisting health and beauty companies with FDA, advertising, and Proposition 65 compliance, trademarks, patents, copyrights, privacy/it, and litigation. “He is known for his passion, results, friendships, and a strong team with offices in Chicago and Washington D.C.,” CANI said. Amin also sits on the CANI board of directors.

Forbes has been actively involved in the Australian health and pharmaceutical industry since 1980, initially developing and introducing newly-formulated complementary medicines and ‘practitioner only’ products. As the Australian regulatory environment for complementary medicines evolved in the late 1980s and the Therapeutic Goods Administration (TGA) was established, he switched his focus from the formulation and promotion of finished products to consulting on the new compliance obligations facing the industry. Robert Forbes & Associates (RFA) helps companies in the U.S. import products into Australia and New Zealand. RFA provides regulatory advice to dietary supplements, food and beverages, cosmetics, personal hygiene, and domestic cleaning products, as well as medical devices. Forbes, who served as the CANI vice president, has been a long-term member of numerous professional and industry associations. He has been appointed to regulatory policy committees and has spoken at conferences in Australia, China, New Zealand, and the U.S. Forbes was a co-founder of the Association of Therapeutic Goods Consultants in Australia, where he served as president for 20 years.

Francis has her own insurance agency, the Colorado-based Specialty Insurance Partners, and has been a member of the insurance industry for over 45 years. Additionally, she has been CANI secretary since 2013. Francis specializes in dietary supplement, nutraceutical, and CBD/hemp industries insurance for manufacturing and retail organizations. SIP provides product liability, work compensation, property, clinical trials coverage, business auto, transit/cargo, stock throughput, and other coverages.

Baker has 30 years of experience in executive management positions within the nutrition industry, and has developed a range of nutraceutical brand marketing, public relations, and promotional campaigns. Among these campaigns were brands including CitriMax for InterHealth, Cognizin and Setria for Kyowa Hakko USA, and Cerebelle for DianaFood, as well as successfully promoting a host of other retail supplement brands including Life Extension. Under his direction, the Baker Dillon Group received top marketing communications awards from the Los Angeles Marketing Association, Press Club of San Francisco, Peninsula Press Club and San Francisco Bay Area Publicity Club where he served as president. He is also a contributing writer to Nutraceuticals World, writing the monthly Health E-Insightsand Area Code 420interview columns. Baker was formerly CANI president from 1995-2001, and currently serves on the CANI board of directors as well as on the board of directors for ImagineU Children’s Museum in Visalia, California.